Differentiating between the Divine Purpose of the

This assumption is promoted by the modern corporate church which characterized the 1835 D&C as an enlarged compilation of the 1833 Book of Commandments.

“A number of the revelations were published in Zion (Independence), Missouri, in 1833, under the title A Book of Commandments for the Government of the Church of Christ. Concerning this publication the elders of the Church gave solemn testimony that the Lord had borne record to their souls that these revelations were true. As the Lord continued to communicate with his servants, an enlarged compilation was published two years later in Kirtland, Ohio, with the title Doctrine and Covenants of the Church of the Latter Day Saints.”

One of the official student teaching manuals of the church makes the following declaration:

“The Book of Commandments was the original title for the collection of revelations that was to be published. When the press and most of the copies were destroyed by a mob in Jackson County, the Prophet decided to add additional revelations that had been received in the meantime. The expanded edition was called the Book of Doctrine and Covenants“.

Another website sponsored by skeptics of the restoration basically echos the false teaching coming from official statements of the church:

“The book was reprinted in 1835 under the title Doctrine and Covenants. The expanded edition contained a large number of new revelations, as well as some modified copies of the older revelations”

In this series I am going to challenge the assumption that the Doctrine and Covenants represents an “enlarged compilation” or “expanded edition” or a “reprint” of the Book of Commandments.

From 1835 until today the D&C has been published and updated many times. Each time some revelations were added, deleted, and in some instances altered, yet the name of the canonized book of scripture has remained the same because each of those publications did indeed represent expanded editions of the same canon of scripture. For instance, the 1844 edition of the D&C was the next version of the 1835 D&C and it therefore retained the same name.

Is that a coincidence?

Why then, was that not the same situation with the Book of Commandments?

Why wasn’t the 1835 Doctrine and Covenants simply called the second edition of the Book of Commandments? Why did Joseph Smith and the other three members of the committee that compiled the revelations for canonization change the name?

Why were they inspired, and in fact probably commanded by the Lord , to call the second cannon of scripture by a different name?

Was there a need to distinguish and differentiate the two cannons of scripture and if so, why?

I would submit that the Lord inspired the name change because the Doctrine and Covenants was never intended to simply be an updated or expanded version of the Book of Commandments.. in fact, it was a cannon of scripture with an entirely different purpose and it was addressing a different church, living in a different dispensation.

A Book of Commandments for the Government of the Church of Christ, Organized According to Law on the 6th of April 1830

The original full name of the Doctrine and Covenants was

The Doctrine and Covenants of the Church of the Latter Day Saints: Carefully Selected from the Revelations of God

Many of the Kirtland saints were confused by the name change of the church. They didn’t feel that the true Church of Christ would need to experience a name change if it was originally organized and named by revelation.

Furthermore, the Book of Mormon had warned that the true church of Christ must be called by his name.

Jesus Christ revealed the name of his church to the Nephite people: the “Church of Christ“.

“And they who were baptized in the name of Jesus were called the church of Christ.” (3 Nephi 26:21, bold added)

“And they said unto him: Lord, we will that thou wouldst tell us the name whereby we shall call this church; for there are disputations among the people concerning this matter. And the Lord said unto them: Verily, verily, I say unto you, why is it that the people should murmur and dispute because of this thing? Have they not read the scriptures, which say ye must take upon you the name of Christ, which is my name? For by this name shall ye be called at the last day; And whoso taketh upon him my name, and endureth to the end, the same shall be saved at the last day. Therefore, whatsoever ye shall do, ye shall do it in my name; therefore ye shall call the church in my name; and ye shall call upon the Father in my name that he will bless the church for my sake. And how be it my church save it be called in my name?”

As we have discussed in other articles, once the gentile Church of Christ rejected the greater light, the fulness of the gospel containing the fulness of the priesthood was taken from among them and they had to change their name.

On April 6, 1830, LDS church leaders met together presumably to fulfill the requirements of the laws of the land, and they named their church consistent with the admonition of the Book of Mormon, “The Church of Christ.”

“The rise of the Church of Christ in these last days…by the will and commandments of God, in the fourth month, and on the sixth day of the month which is called April”

Yet, after the saints failed to embrace the fulness of the gospel, containing the fulness of the priesthood and the law of consecration, during a conference held on May 3, 1834, with Joseph Smith acting as moderator, “a motion was made by Sidney Rigdon, and seconded by Newel K. Whitney, that this Church be known hereafter by the name of ‘The Church of the Latter-day Saints.’ Remarks were made by the members, after which the motion passed by unanimous vote” (History of the Church 2:62-63). er, p. 73).

On that historic occasion, by unanimous vote, the saints took the name of CHRIST out of the official name of the church!

In essence, whether unwittingly or whether knowingly, that event appears to have been inspired.

That event acknowledged that the church was no longer worthy of being called by the name of Christ. (The Lord had told the saints that if they did not live the law of Zion they were not worthy to be called by his name and were not his people)

Of course it  appears that the saints didn’t generally understand the real reason for the name change of the church.

David Whitmer, who seemed to blame all bad things on Sidney Rigdon would later imply that after being inspired by the Lord to name the church in the Lord’s  name, that it would be Rigdon’s influence that got Joseph to make the name change-

“In June, 1829, the Lord gave us the name by which we must call the church, being the same as He gave the Nephites.  We obeyed His commandment, and called it The Church of Christ until 1834, when, through the influence of Sydney Rigdon, the name of the church was changed to The Church of the Latter Day Saints, dropping out the name of Christ entirely…” (An Address to All Believers In Christ Whitmer, p. 73). er Day Saints

LDS apologists who contend that the original name was not really changed but simply given a nick name to differentiate it from other contemporary churches, (for example, Alexander Campbell had founded a church that was called the “Church of Christ” ) have two very difficult problems to explain.

One is the title given to the 1835 Doctrine and Covenants. wherein it was called the Church of the Latter day Saints.

The other problem can clearly be seen on the face of the Kirtland Temple.

It is no coincidence that when the Kirtland Temple was completed and dedicated in 1836, the Lord restored the gospel of Abraham instead of the dispensation of the fulness of times.

Notice the name of the Kirtland Temple which is the same name that was engraved in a tablet on the Temple at the time of it’s dedication in 1836! 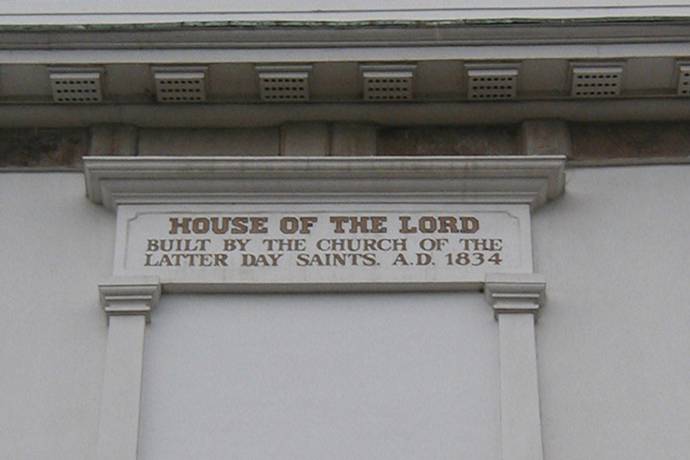 About four years after the name change downgrade in 1834, on April 26, 1838, another name change was assumed by the Saints. The name of “The Church of Jesus Christ of Latter day Saints” appeared to be given to the church by the Lord in Section 115. (It is my contention that Section 115 was actually a prophecy about what the scattered Saints would be called when the Marvelous Work begins, but that is a subject for a future post. For the purposes of this series, I am simply going to acknowledge that the Saints took upon themselves that name based on their interpretation of Section 115 in 1838. (Historical records indicate that they probably began calling themselves by that name previous to that revelation, but that revelation is the scriptural basis the church claims for re-inserting the name of Christ. The hyphen in ‘Latter-day’ was add about a century or so later to be grammatically correct).

Although 1838 is the first time in modern revelation that the fourth and final name change is acknowledged by the Lord, other historical documentation no doubt verifies that the new name began being used in Far West.

The chronology of the names by which the restored church was called is:

1831   Church of God (See D&C 70:5 referring to those within the Church of Christ who were called to the Melchizedek Priesthood)

1838: The Church of Jesus Christ of Latter Day Saints ( although the fourth and final name change shows up for the first time in canonized scripture in section 115, it was probably being used earlier than that during the early Far West era)

I would submit that the Book of Commandments and the Doctrine and Covenants had two very distinct and different purposes and they were addressing two separate churches.

This is proven by the names given to these two cannons of scriptures.

However, there is much more evidence to support this proposition which will be addressed as we continue this series. It is not just two different churches being addressed. The actual purpose of each book is quite different.

This entry was posted on Sunday, December 11th, 2011 at 11:03 pm and is filed under Uncategorized. You can follow any responses to this entry through the RSS 2.0 feed. Both comments and pings are currently closed.

7 Responses to COMMANDMENTS-DOCTRINE-COVENANTS Part One